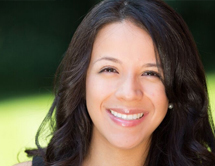 21-year-old Daniela Fernandez, born in Ecuador, became passionate about climate change after watching Al Gore's ‘An Inconvenient Truth when she was in elementary school.

She currently is a government and economics major in her Junior Year at Georgetown University and the Founder and Chair of the Sustainable Oceans Alliance’ (SOA), a student led organization that empowers Millennials to become leaders in preserving the health and sustainability of the oceans.

During a trip to the United Nations in 2013 Fernandez learned that the world’s fisheries could collapse by 2050 affecting the global economy, food chains, and tourism. She understood that the world’s ocean – its temperature, chemistry, currents and wild life – make Earth habitable for everyone, everywhere. She was deeply concerned about the repercussions and felt that her generation was key to bringing more attention to the problem of ocean sustainability.

She returned to campus with the idea of starting an organization to educate and empower the Georgetown community and other university students with the knowledge to do something meaningful about ocean sustainability in their careers—regardless of whether they are going into finance, banking, health, or teaching.

This led her to organize the first annual ‘Sustainable Oceans Summit’ in 2015, which convened Millennials, NGOs, business executives and policy leaders to discuss the challenges and potential solutions surrounding ocean sustainability. Now in its second year, the Summit has been broadcast globally engaging thirty universities, multiple U.S embassies and has included over 2,000 participants.

Along with Fernandez' work on the Alliance and her course work, she has also been a contributor to The Economist Insights blog and was a special guest at The Economist World Ocean Summit in Portugal. She was invited to the United Nations to present a petition on behalf of the millennial generation in anticipation of the Sustainable Development Goal vote supporting the ocean—SDG 14: to conserve and sustainably use the ocean, seas and marine resources. She was named Student Leader of the Year by the Georgetown McDonough School of Business Global Social Enterprise Initiative and has been recognized as a Green 2.0 environmental leader.

After graduating, Fernandez plans to become a social entrepreneur, starting her own impact investment firm focused on projects that promote environmental sustainability and social good.